The IC Centre for Governance organized the first ‘ICCfG Sardar Patel Lecture on Governance’, which was delivered by Shri Venkaiah Naidu, Hon’ble Vice President of India, at the Sardar Vallabhabhai Patel Conference Hall at the VP’s Residence at 6, Maulna Azad Road, on the 24th of January, 2020. 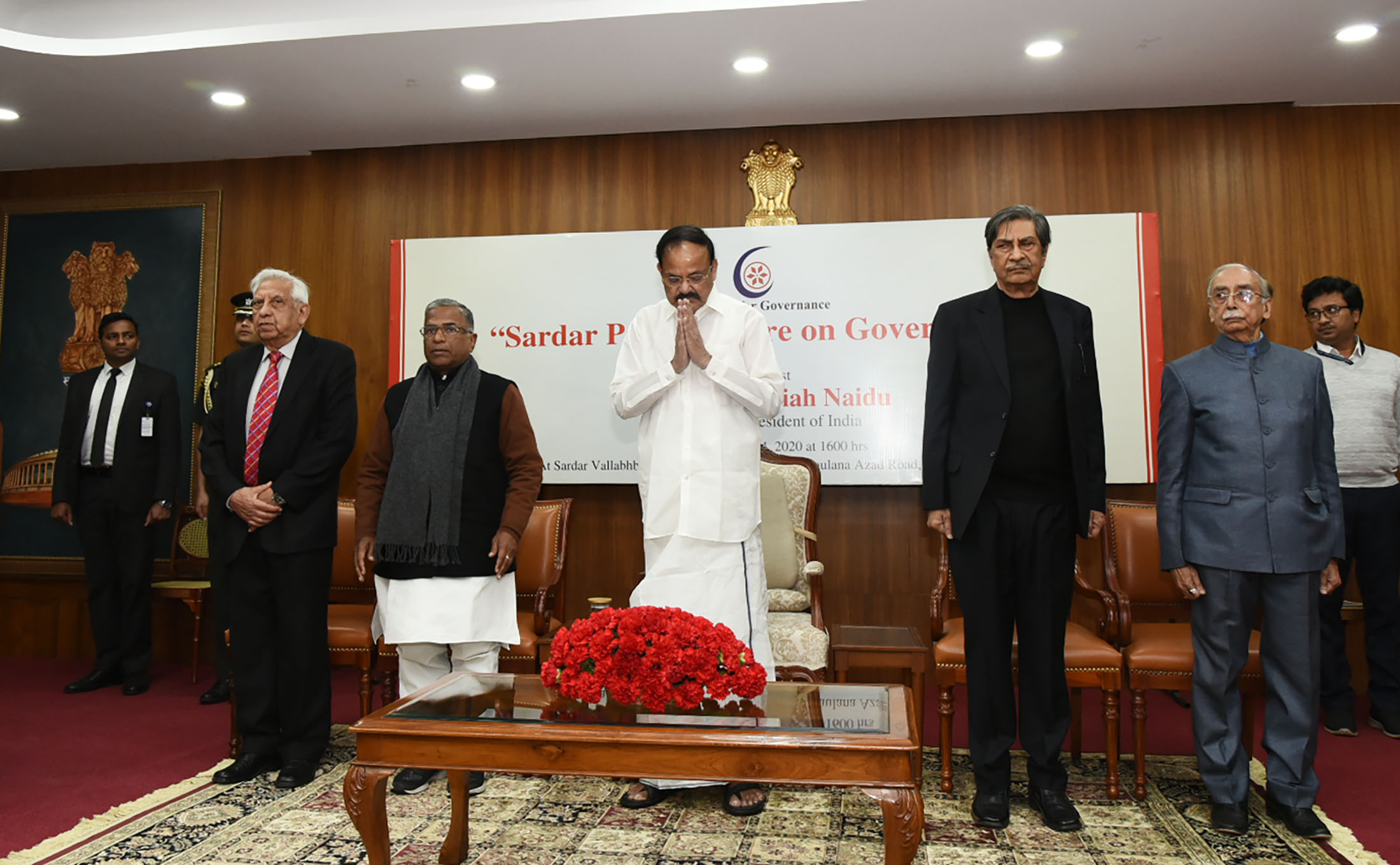 Shri Harivansh Narayan Singh, Deputy Chairman, Rajya Sabha, Presided over the event and Shri Prabhat Kumar, Former Cabinet Secretary and President, IC Centre for Governance, gave the Introductory Remarks. Shri Mahesh Kapoor, Former Advisor, Planning Commission and Vice President, IC Centre for Governance, delivered the welcome address as well as the vote of thanks at the conclusion of the lecture. Shri Shanti Narain, Former member Traffic, Railway Board and Secretary General, ICCfG, was also present on the dais with the other dignitaries.

Shri Prabhat Kumar mentioned how he has been an admirer of Shri Naidu for more than two decades, who is an excellent orator and has always championed the cause of farmers and the downtrodden. He thanked Shri Naidu for delivering the lecture, and Shri Harivansh for presiding over it. He spoke about the feats of Shri Harivansh as a media person and then in governance. Shri Kumar provided the rationale for conducting a lecture on Governance in the name of Sardar Patel with his unparalleled contribution in the building of modern India for which he is called ‘The Iron Man of India’. Shri Prabhat Kumar also emphasized that the responsibility for good governance doesn’t just rest on the government functionaries, but also with each citizen of India.

Shri Harivansh said that it was an honour for him to be presiding over the event in which the Hon’ble Vice President himself was delivering the keynote address, and elucidated the contribution of the IC Centre for Governance in championing the cause of good governance and ethics in governance since many years. He spoke about the popularity of Shri Prabhat Kumar as the Governor of Jharkhand, where he did not remain just a nominal head of the State but was active and involved in governance issues and took several ethical initiatives towards the same.

Shri Harivansh spelled out some key legislations like the Motor Vehicles Act, Food Adulteration Act and more, which witnessed some long due changes and amendments due to the contribution of Shri Naidu. He said that for a robust nation, the most important thing is to make governance effective and strong, and that the Sardar Patel Lecture was a step in this direction. He pointed out that independent India took a lot of time in recognizing the true greatness of Sardar Patel and his magnificent contribution to our country. 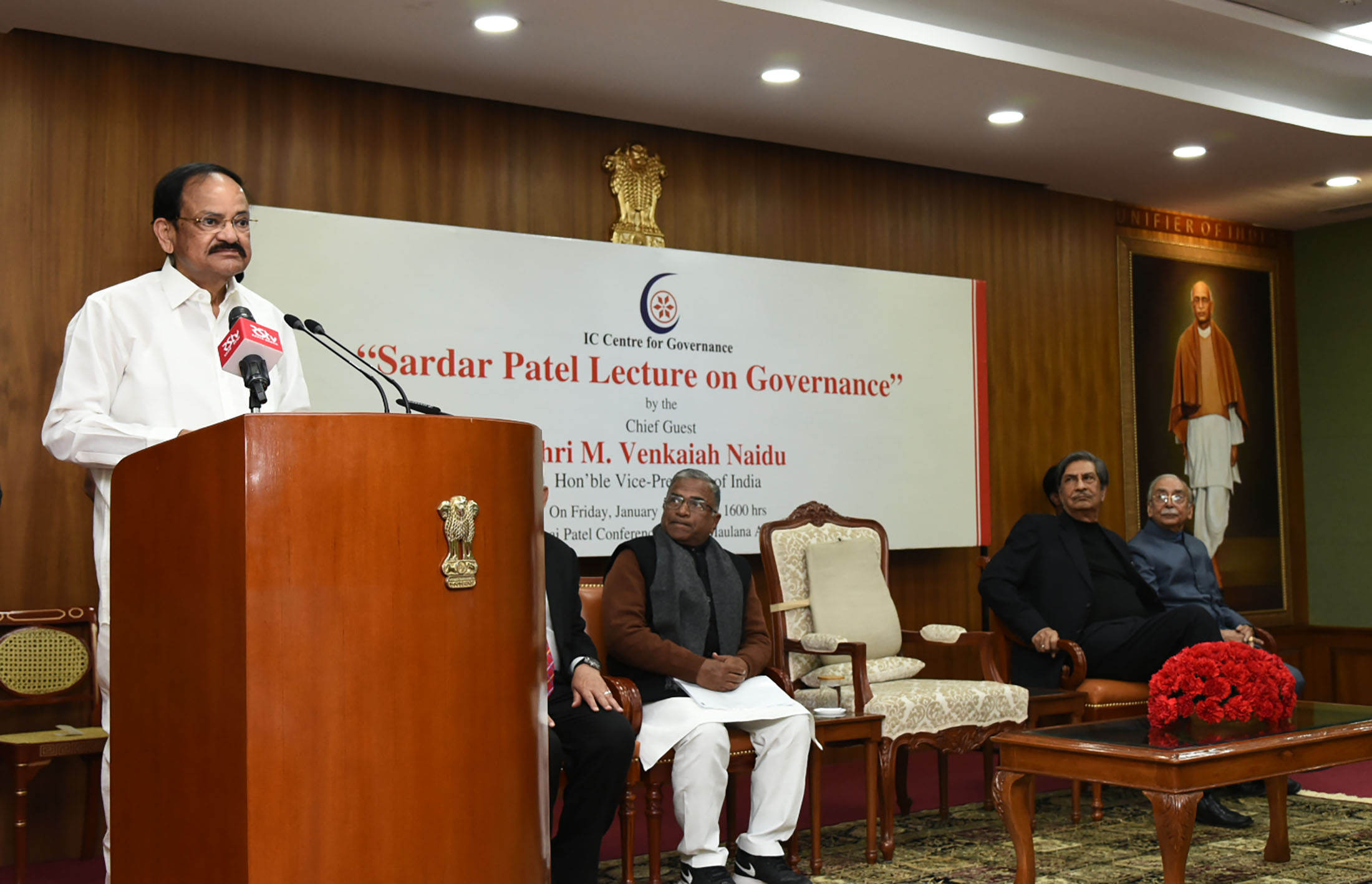 The Hon’ble Vice President of India began with the mention of a huge debt that all Indians owe to Sardar Patel, a great son of a great country, for unifying India, one of the greatest achievements of the 20th century. In this context he recalled that the accession of Jammu and Kashmir to Indian Union was total, final and irrevocable. He also pointed out that Article 370 was only a temporary provision and said that it had outlived its purpose long back.

The VP said that we should remember that Sardar Patel knew that India was under foreign rule due to lack of Unity, and we should also remember that the need of the hour in the present times is unity; we should not let the forces inimical to the interests of our nation divide us. The nation should come first for all of us, transcending the boundaries of caste, creed, gender etc., and all Indians must be treated equally, even the poorest of the poor. People should feel they can participate in the government and the government, on the other hand, should be accountable to the people and operate with transparency.

He specified that rights and duties go together. Authority should not be corrupted by power, and the people should feel that they are a part of the development story of the country.

He called for a movement for ethics in governance to be generated at all levels and a total war on corruption through a peoples’ movement. He said that the United Nations should step in so that the international community comes together to exchange information about overseas bank account of fraudsters and tax evaders.

He referred to the use of technology in reducing corruption, by making most government operations online, direct benefit transfers in bank accounts, etc.

He said that in a rapidly changing world, public institutions cannot remain unchanged and that the bureaucracy must take the lead in transformation of institutions. There should be no gap in the intent and delivery of public services, with an unflinching commitment to excellence. Competence and credibility of the governance structure has to be maintained with a positive outlook, instead of being cynical.

He said that Ram Rajya basically means inclusive growth without poverty, hunger, illiteracy, corruption and other social ills. He also said that just like Shri Prabhat Kumar and others at the IC Centre for Governance, retired senior civil servants must speak out and attempt to benefit the nation with their rich experience and knowledge.

He concluded by saying that there is a lot of scope for dissent in the country, but not for disintegration.

The event was attended by over a hundred audience, including eminent persons like Shri Soli Sorabjee, Former Attorney General of India, Shri Sanjay Kothari, Secretary to the President of India, and a number of former and serving senior civil servants, members of the academia and the corporate sector.